Images of Fr. Arrupe, Fr. Nevel, the Hasegawa conversion, and Tadashi’s ordination as a Franciscan priest.

Fr. Arrupe’s return to HIroshima, circa 1970

Before The Atomic bomb

The city of Hiroshima and the Hasegawa family before the calamity of the atomic bomb.

Another view of the bridge

Tadashi in his kendo gear

Tadashi in his school uniform

Kunie – the youngest sister who persished in the atomic bombing. 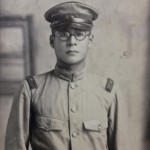 Middle sister Sachio (5th from left) with fellow workers at the Mitsubishi factory.

After the Atomic Bomb

Images of the destruction from the atomic bombing.

The Atomic Bombing of HIroshima, August 6, 1945

View of the blast taken by Yoshito Matsushige

Fires raging after the blast.

Where Tadashi and his friends were swimming.

Map showing where Tadashi was – 2km from the epicenter.

A relief station set up on the river bank

Damage at 2km from the epicenter

Healing and the Road to Priesthood

Images from Tadashi’s life during the time after the bombing when he went back to finish high school and eventually entered the seminary to study to become a Catholic priest.

Tadashi in his high school uniform

Tadashi with one of his paintings.

With a couple of friends

Another of his hobbies….

Sokichi and Toyono (Father and Mother)

Hiroshima today plus recent images of Tadashi, his family and his tombstone. Tadashi passed away from cancer in 2012.

The Cenothaph at Peace Park

From the 65th Anniversary of the Bombing

The museum at Peace Park

Flock of doves released during the ceremony

Oshiba park – where they spent the first days.

A memorial to all who died in the park

The siblings on a trip to Europe; Tadashi, Sachio, Kanoe, Haruo

Tadashi in the hospital in 2010

The dates he was born, ordained, and died.